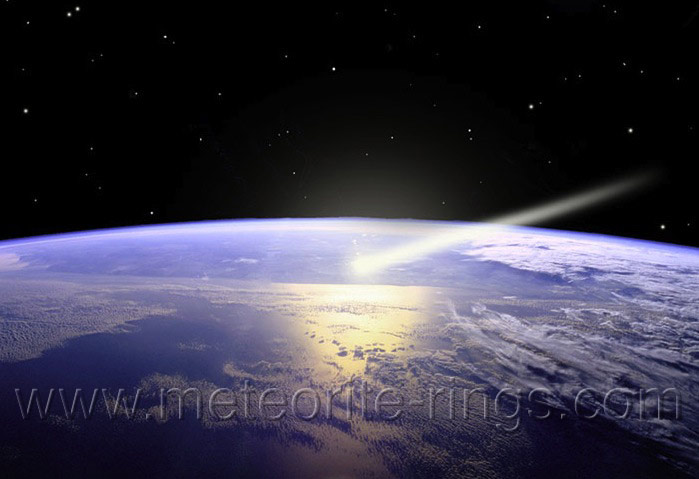 Our Gibeon rings are made from jewelry grade pieces of Gibeon Meteorite. The Gibeon is a fine octahedrite meteorite which streaked into our atmosphere as a brilliant fireball some 30,000 years ago. It crashed into southwestern Africa. The Gibeon meteorite traveled through space for over four billion years before it crashed to earth as a fire ball. It is composed of various alloys of iron and nickel, as well as a number of extremely rare trace elements. The Gibeon meteorite was derived from the core of an extinct planet that was blown apart billions of years ago during the formation of our solar system by a catastrophic impact event. The beautiful crystalline patterns within Gibeon meteorites are known as "Widmanstatten patterns", and are unique to meteorites.

Our custom meteorite rings are quite durable. That being said, if you would like your ring to stay looking nice you should care for your ring as you would any other fine jewelry. Some common sense will go a long way. Don't wear your jewelry while doing yard work, construction work, automotive work, or similar activities or while handling abrasive or corrosive materials. Don't abuse your jewelry, or hit it against hard objects that could dent or scratch it. The Gibeon and Seymchan meteorites tend to be naturally rust-resistant, so while hand washing and showering are, in our experience, not a problem, we do not recommend exposing your meteorite jewelry to excessive moisture. As with any fine jewelry, our rings should not be exposed to chlorine, bleach, chlorides, house hold cleansers or acids (nor should your hands). Don't wear your jewelry in salt water, the hot tub or swimming pool. Some hand lotions can cause staining of your finger so we avoid wearing hand lotions with meteorite rings. In cold weather or if you go swimming, your finger can shrink substantially causing your ring to fall off, so don't go swimming with your jewelry. After a number of years, the etched pattern of your meteorite ring may be less sharp. If this occurs, the ring can be re-etched.

WARNING: Like several other types of jewelry, meteorite rings contain iron, which is naturally attracted to magnets. To prevent your ring from being pulled or yanked do not wear your jewelry near strong magnetic fields such as MRI machines, powerful electro-magnets, rare-earth magnets etc

There are thousands of cheap, Chinese made, FAKE meteorite rings being sold online and elsewhere. These rings contain ZERO meteorite and just have a textured surface made to superficially resemble real meteorite to the novice eye. Below is a photo of just two of these FAKE meteorite rings. Don't be duped by these cheap FAKES!

We have also the Rust-Prone 'Muonionalusta' meteorites being sold as stable "Gibeon" meteorites. Muonionalusta meteorites looks superficially similar to Gibeon when cut and etched, however, in our experience they tend to be much more prone to rusting, much more common and much, much cheaper. Muonionalusta is what we refer to as a "Ruster" meteorite. When made into jewelry, Muonionalusta is often so unstable that it needs to be plated with some precious metal to temporarily keep it from rusting away. We were recently contacted by a Chinese jewelry manufacturer looking to buy large quantities of Muonionalusta meteorites for use in jewelry and for resale. We informed them that muonionalusta was not suitable for jewelry but that didn't phase them a bit. They said that they needed up to one ton of muonionalusta per year! They sent us a photo showing an example of their meteorite jewelry (which appeared to us to be plated). When we looked them up online, they were selling what appeared to be the exact same product as "Gibeon" meteorite jewelry! Who knows how much fake "Gibeon" has been sold to unsuspecting buyers.

NOTICE OF COPYRIGHT: This web site and all of its contents are copyrighted ©. No reproduction without prior written permission from the copyright holder.